Last year started off badly for US journalism, with more than 1,000 job loses by February. Unfortunately, that trend continued, with more than 7,800 layoffs by December, according to a Business Insider article.

For context, BI noted that "it's estimated that some 5,000 media jobs were cut from the market from 2014 to 2017." So nearly 50 percent more losses in one year than were lost in three years combined.

What's surprising is that the layoffs didn't hit only newspapers. (1 in 5 local newspapers have closed down since 2004.)

There were big loses in big-name online sites including BuzzFeed, Vice Media, Verizon Media, Bustle, Quartz, and more. For Verizon's media units, Yahoo, AOL and Huffpost, there had been two sets of layoffs in 2019, resulting in the loss of 830 media jobs. (This does not include 10,400 losses-by-byouts in other Verizon jobs.)

Gannett, which merged with GateHouse Media in December to become the largest newspaper publisher by circulation, cut 400 jobs at its newspapers around the country, including US Today. Entrepreneur laid off four editorial staffer, restructuring on digital offerings. Jet, Ebony and New York Magazine announced lay offs, too. For us, a big sentimental loss was that of Mad magazine, which announced it would stop publishing new content, affecting 10 staffers and hundreds of freelancers.

The Washington Post eliminated its free commuter paper, the Express , after 16 years, because it found that the young readers it was aiming for no longer picked up a free -- that's right, free -- edition as they hopped on the Metro. That's because they accessed news on their phones (something that hadn't been around when the Express was launched). That's not the only free commuter newspaper to fold. Metro Boston, another free commuter paper, suddenly shut down this month after 19 years, after its sister publications, Metro New York and Metro Philadelphia, were sold. Metro Boston had a circulation of 300,000 in 2005 but fell to about 50,000 in 2019, the Boston Business Journal reported. 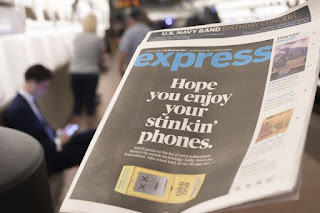 Sports Illustrated, which was licensed to The Maven, cut "nearly 40 staffers...(with) plans to replace some full-time positions with contract" writers. And there are serious concerns about quality of the product because contract freelancrs are required to write many more articles for far less money -- especially upsetting because SI has long had the highest standards in sports journalism.

There were also broadcast losses at NBC, ESPN, NPR, CNN, Disney (as the result of its acquisition of 21st Century Fox movie studio).

The Youngtown Vindicator ceased publishing around its 150th anniversary, the Cleveland Plain Dealer laid off 12 additional newsroom employees along with as many as 30 production jobs. The St. Louis Post-Dispatch announced 23 jobs axed, Dallas Morning News eliminated about 20 newsroom jobs and the New Orleans Times-Picayune laid off all its staffers after being acquired by the Advocate, a competing newspaper.

The concern about the loss of local news media is that it has implications for the communities in whcih they operate. For example, local news media tend to be more trusted that national media. Local media help support local organizations in the community, helping to provide a sense of community. And they keep the community informed about issues affecting them.

U.S. news media used to be able to count on advertising and subscription revenue to fund operations but the shift to online or app has reduced both revenue streams, but especially advertising revenue. Unfortunately, with a few exceptions, there seems to be no sustainable business model that will help keep news outlets in business. We expect some uptick in revenue in battleground states, thanks to the presidential election but that won't last.

Which means: we expect more layoffs in 2020 and 2021. So we ask marketers to consider finding ways to support media.

Posted by Norman Birnbach at 9:59 AM