Wired Validates 5 of Our Trends

We're already seeing validation of some of our trends. The January issue of Wired ran two articles of note to our trends: cutting the cord and the gig economy.

About cord cutting, we said, "We expect some people not to cut the cord because it’s more complicated and not necessarily cheaper if you cut the cable cord." In an article called "Cord-Cutting Is Gonna Suck in 2016, But It'll Get Better," Wired identified the same problem we did: the cost of different subscriptions services, the complications of how to access it including of when you exceed your data limit means that cord-cutting isn't the solution you think it. 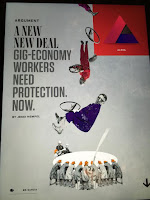 We also said the gig economy will generate coverage in 2016, and that "To pessimists, it means that people won’t have the safety net of company-provided healthcare and benefits." Also in the January issue (and not yet available online), is an article by Jessi Hempel called, "A New Deal: Gig-Economy Workers Need Protection. Now."

Check out the article when it becomes online.

Actually, in his Letter from the Editor, Scott Dadich identified other trends that validated ours. Dadich feels that VR will go mainstream in 2016 while we think VR will still be much more of an early adopter tech next year.

We agree with him (or he with us) that "AI comes to the everyday" (we said, "The rise of AI"). We both offered up concerns about unicorns, mostly that startups worth upwards of $1B will become on the verge of extinction -- okay, that's overstating things; it's just going to be much more difficult for them in 2016.

And in "Autonomous driving gets serious," Dadich agrees with us that "we won't be handing over the steering wheel this year," and that a big issue is "talking about regulations" -- while we said the big issue isn't the tech or safety issues but "the insurance requirements."

So, judging by Wired, we're doing pretty well with our predictions.

Also, check out Fast Company's "Twenty Predictions for the Next 20 Years," by Robert Sarfian, which has a lot of interesting good trends.

Meanwhile, by the way, we expect a lot of IoT news coming from CES next week.

Here's to a happy New Year, and more tech validations.

Posted by Norman Birnbach at 8:43 AM No comments:

Here's our third set of trends that we expect to have an impact in 2016:

Let us know if you agree or disagree.

Please note: We're going to take a break for Christmas and New Year's -- which isn't to say we won't be working, just not blogging.

While we sometimes look at cultural events, we will not discuss the impact of "The Force Awakens" since many have not seen the movie yet (or have not seen it a second time, yet) nor the presidential election.

Here are our second set of marketing and technology trends that we think will have an impact in 2016.
We will issue our next set of predictions tomorrow. But let us know what you think of today's trends.
Posted by Norman Birnbach at 8:04 AM No comments:

As we have for 15 years, we've compiled a list of trends to help our clients navigate the complex and ever-changing communications landscape and engage more effectively with traditional and social media and other influencers.

Look for more trends over the next week. And please let us know if you feel we got things right or wrong.

Instead of updating TrendWatch once a year, we plan to look at trends twice in 2016. To subscribe to our TrendWatch newsletter, please email us at TrendWatch [at] birnbachcom.com.
Posted by Norman Birnbach at 9:44 AM No comments:

Track Record for Our 2015 Predictions

A lot of people issue predictions, but we feel it's important to look at the prior year's predictions to provide some integrity to the process. But it also helps us focus on changes for the following year.

We try to cover a lot of ground when making predictions, certainly covering our client's sectors (without taking away from what they're doing or hyping what they're doing). But there's a lot of things we miss. For example, we -- like most of the rest of the world -- did not predict that Donald J. Trump would be a GOP front runner for five months. (We're guessing that only Donald J. Trump would have made that prediction last year.)

So here are our grades based on the trends we predicted for 2015:

Here are our predictions for 2015:

Posted by Norman Birnbach at 8:50 AM No comments:

We've been doing this for more than 15 years, and it's become a way for us to close the year.

Expect our track record by the middle of this week, and the predictions by next week. Consider them a slightly early Christmas present (or a late Hanukkah present).
Posted by Norman Birnbach at 8:19 AM No comments: