It's a little early for us to admit we missed a trend -- we usually wait until the end of the year to evaluate how we did. But we missed a big Q1 trend: Wordle, a daily online game that has caught fire since it was launched late last year. It is so popular that we're not going to describe how the game is played. Just a week or so ago, the New York Times announced it has acquired Wordle to add to its growing portfolio of games like Spelling Bee. 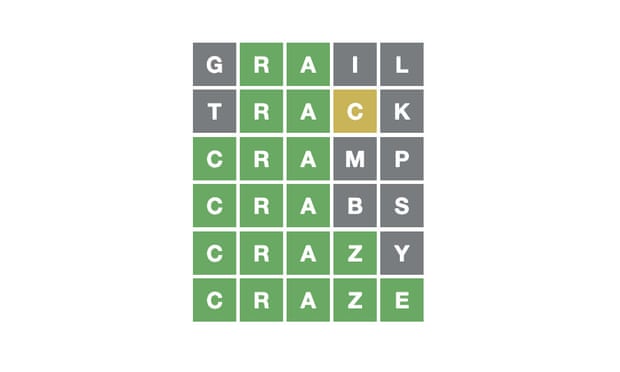 What makes Wordle a trend? We play it ourselves and find the once-a-day aspect to be part of its charm. There's a site that offers access to the Wordle archive, and binging through several at a time loses the appeal. We do see articles online every day about "the best words to use" to start figuring out the word of the day. Another way to know it's a real trend: there's a minor backlash to Wordle, such as The Verge's "The New York Times has changed Wordle’s solutions" and the New York Post's "And the Wordle backlash begins: 'Blaming this on the Americans.'"

According to the Post, which generally has an "America First" mindset unless it can attack the New York Times, there's a backlash outside the U.S. because Wordle uses U.S. spelling. We know it doesn't fit Wordle's five-letter words but we don't want to spoil an solutions so we'll point out that apologise -- which is how the word is spelled outside the U.S. -- would not be accepted because Wordle would be looking for apologize.

According to some of us in the trend-predicting world, it's not a trend until there's a backlash so Wordle can be classified as a trend.

One we totally missed.

We don't know if Wordle has legs as a trend but it's certainly hot right now. And what we think is clear is that we're living in an attention economy. The reason the Times spent six figures to acquire Wordle shows there's money to made for them to host Wordle.

Twenty years ago, in the dot-com era, the goal for many was to get eyeballs -- people spending time on their site. That's really what social media is all about, and why the algorithms of TikTok, Facebook, Twitter, etc. are so important and influential -- and often not in a positive or productive way.

But that's not the trend we got right. But it's related to it.

One of our trends is that publishers will move away from print editions. We love print editions, and still see the value in them. But according to the Reliable Sources Newsletter by CNN that cited a Wall St. Journal article, six magazines that Barry Diller acquired from Meredith Corp. last year -- Entertainment Weekly, InStyle, EatingWell, Health, Parents and People en Espanol will stop publishing print publications. Their last issues will be in April.

How did Diller's company, Dotdash Meredith frame its decision?

"We have said from the beginning, buying Meredith was about buying brands, not magazines or websites,” according to the CEO.

We get it. After all, in 2022, is weekly even enough updates about entertainment? Of course not.

And Dotdash has "19 remaining print magazines," according to the Journal, including People, Better Homes & Gardens and Southern Living -- all of them major publications.

But here's the thing -- and we'll talk more about this throughout this year.

Some subscribers prefer the print editions. Certainly doctors' waiting rooms do. So what happens to those subscribers who prefer print? One of us used to go to a dental office with horrible Internet access -- everyone complained about it -- but for people waiting in those sorts of locations, they can't rely on their phones for distraction.

And we think people who used to allocate time to turn the pages of Entertainment Weekly, People en Esponol and the other magazines ending their print run. The question for them and for Dotdash and other publishers considering ending their print publications is this: How will readers spend their time? Will they go online to the app or website of the publication? Will they remember to do so or just get their entertainment news elsewhere, whether print or online? Or will they shift to playing games like Wordle?

Posted by Norman Birnbach at 9:00 AM