Ok, this is not a PR or media topic, and I'm not trying to suggest anything untoward about McCain and Palin. But in its article, "To Have (as a Running Mate), and to Hold (Politely),"the New York Times raises an issue that at times has confused me and others I know, men and women alike.

The Times describes the body language John McCain uses with Sarah Palin as a "businesslike (hug), to the point" when introducing her on stage.

What is a business-like hug?

I guess I know a non-business-like hug.

But what are the characteristics of a business-like hug -- do you know it when you see it? And when are they appropriate. I guess they are now appropriate when introducing your running mate during a campaign stop. But what about the rest of us?

When is a business-like hug appropriate for colleagues? For clients?

With a male client, there would have been no question: just a handshake. But yesterday, I shook hands yesterday with a woman client yesterday, and then felt perhaps it should have been a business-like hug. (There were no voters in the hallway, no introductions to a crowd.)

Here are some photos of McCain and the "businesslike, to the point" hug.

By the way, what's also interesting is that in 1984, Geraldine Ferraro and Walter Mondale had a no touching rule out of concern that people might think they're dating. Perhaps that's why McCain makes it a point to give his wife a peck when she's on stage, too. 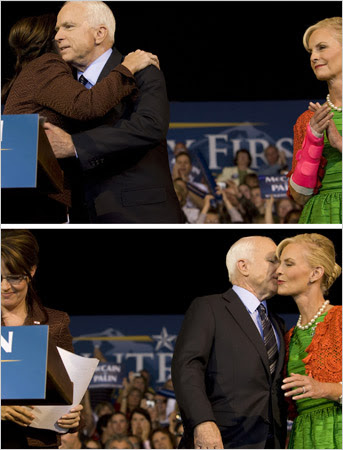 Posted by Norman Birnbach at 9:17 AM