Stealth or Not to Stealth -- Tips from the "Using PR and Social Media" Panel, Part V 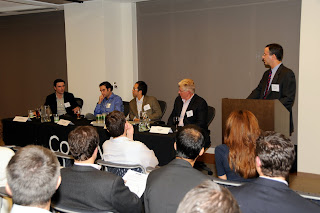 As we prepared for the "Using PR and Social Media to Generate Buzz for Your Startup," sponsored by the New England Venture Network (NEVN) and co-sponsored by Birnbach Communications, the four panelists -- blogger Paul Gillin, Xconomy's Greg Huang, BBJ/Mass High Tech's Galen Moore, and Fortune.com's Dan Primack -- discussed the concept of startups and stealth mode.

A lot of startups operate in stealth mode because they want to to avoid alerting competitors or the marketplace before they are ready to "come out of stealth mode," usually when they have a product in beta.

The problem, the panelists noted, is that stealth mode is hard to actually maintain. For example, sometimes executives actually list their current company on their LinkedIn profile.

Also claiming stealth mode is a way to make startups seem more important -- at least to employees and potential investors -- than the company might really be. They find out the bad news when they try to come out of stealth, only to find that there's still not much interest in them.

In fact, one panelists referred to this as the "idiocy of stealth mode."

Reporters may care about stealth mode if there's something of real interest but the perception was that more companies act in stealth mode than need to be. The problem: their products may be ready for customers, but they're trying to go from zero to 60 in telling their story, and reporters and bloggers need time -- as in any sales process -- to determine what the story is, if it's credible and viable.

The point: it's not always easy to operate in complete stealth mode and it's even more difficult to quickly exit stealth mode.

In fact, the panelists said they'd be interested in a panel discussion of VCs and CEOs talking about their experiences and perspectives on stealth mode.

The panelists also suggested one of the problems in exiting stealth mode is the tension between the VCs and the CEOs, especially in terms of timing and in terms of who is going to drive the message. They really need to message together, but that doesn't happen as much as you might think, one of the panelists noted.

What do you think about stealth mode? Does it make sense? Does it work? Let me know.
Posted by Norman Birnbach at 9:13 AM