When Is a Press Release Appropriate -- Tips from the "Using PR and Social Media" Panel, Part IV

According to the panel of experts -- blogger Paul Gillin, Xconomy's Greg Huang, BBJ/Mass High Tech's Galen Moore, and Fortune.com's Dan Primack -- at last month's "Using PR and Social Media to Generate Buzz for Your Startup," sponsored by the New England Venture Network, the press release is not yet.

I don't think they came to that conclusion because they're waiting for the press release that announces its own death to make it official.

The panel concluded that the press release is still necessary, but that the question now is when is a press release or a blog post or Facebook or Twitter update more appropriate.

Primack referenced an example where Microsoft announced a small acquisition via a blog post, not a press release since -- we assumed -- the acquisition was not material to Microsoft's stock price. The software giant never got around to issuing a press release about the news, but it still got some attention for it.

On the other hand, the panels concluded, the press release is not dead because there's a certain weight and formality to it. But it's seen more as a commodity once competing reporters and bloggers all get the release.

An important factor now is how unique is the information the reporter or blogger is getting. That discussion goes back to the question of exclusives and how and what information you spread around to meet the needs of different reporters and bloggers -- as well as to the other people you might want to reach.

On the other hand, Microsoft announced its recent quarterly earnings on its website, joining an estimated 11 other companies that publish their earning results directly on their websites. The SEC has provided guidance that companies can use the web to meet public-disclosure requirements. But there are critics that say small investors may be adversely affected because they then have to go to different corporate websites to get the information that otherwise is available more easily. Check out a recent WSJ article, "Microsoft Adopts Website Release for Earnings." 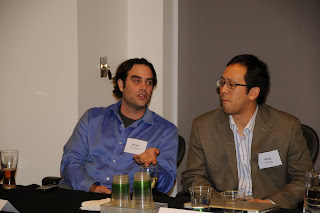 Posted by Norman Birnbach at 8:47 AM