What Makes an Article Go Viral? The Answer May Make You Angry

At one point social media was supposed to lead to more transparency, which would result in more democracy.

That was the narrative, at least, framing the Arab Spring back in 2010 and 2011. The world's hopes were that pro-democratic protests -- including peaceful demonstrations, marches, occupations of plazas, non-violent civil resistance, acts of civil disobedience and strikes -- that started on Twitter would lead to the overthrow of Egyptian leader Hosni Mubarak, and that that movement would challenge other authoritarian governments in the region.

Mubarak did step down as a result of the protests. But, unfortunately, social media did not lead to more freedoms in Arab countries or anywhere else.

True, social media has impacted how most of us get and consume news. But the trend isn't pro-democratic, as evidenced by increased polarization, hatred and bigotry, and disinformation. Social media played a large roll with the Jan. 6th insurrection. So social media is decidedly not pro-democracy.

We mention this because of a recent New York Times article entitled "What Makes an Article Go Viral: Shares, posts and page views: we examine why an article spreads online." The article says "People share articles to strengthen social bonds." That certainly makes sense.

But that leads to a new question: why do people share the articles they do?

The answer comes from a 2012 study of over 7,000 Times articles that sought to understand sharing behavior. Researchers led by Jonah Berger, a professor at the Wharton School of the University of Pennsylvania:

Those emotions are easily seen across social media. And of those four, we'd say anger, anxiety and surprise probably drive a lot of the posts we see when doomscrolling. 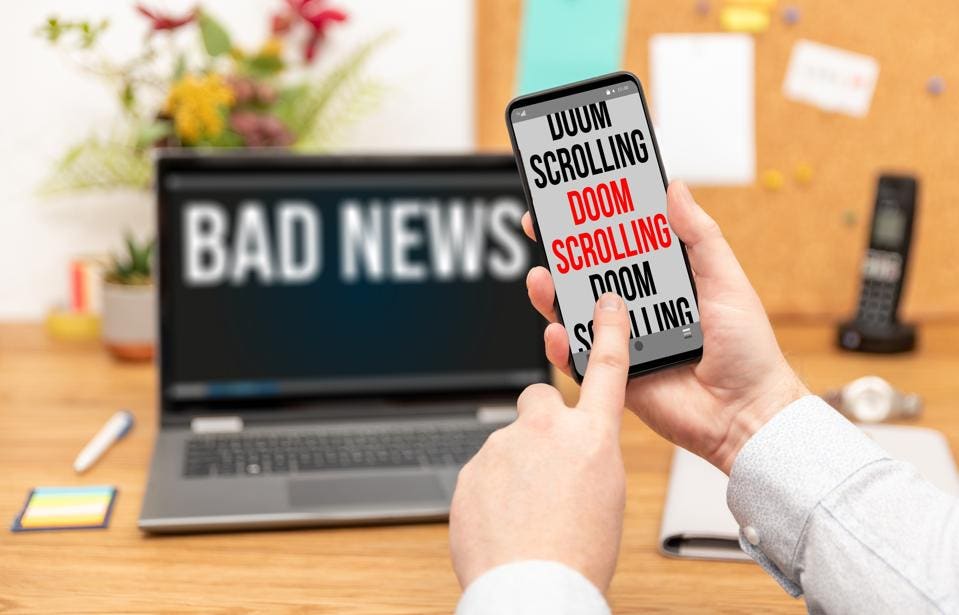 Those emotions are the ones that keep us not only up at night but engaged on social media even when we know we should stop. Those emotions keep us glued.

They are not helpful, and most of know we should stop doomscrolling.

But understanding what drives us to doomscroll and what makes us more likely to share articles and content that makes us anxious and angry may help us control what we're doing.

Interestingly while Twitter and Facebook allow you to complain about posts, often times it seems like they don't respond -- and we've seen jaw-dropping bigotry that gets let up on Twitter -- there's a suggestion that by enabling users to complain but then doing nothing to delete those comments, social media increases your anxiety and anger. And that keeps you engaged on their site. That's pretty cynical.

But the answer, perhaps, is to just not engage. Have a specific time limit or reason to go onto social media, and then disconnect.

Honestly, we could all use less anger.

Posted by Norman Birnbach at 9:33 AM